(To feed four as a main dish)

Disclaimer. This, my friends, is a classic. There are several fine recipes freely available on the internet. My take on this is that I dispense with cumin and I replace ground coriander by fresh green coriander at the cooking stage. And I indulge my ongoing obsession with ginger and green chillies. So it's not classical, but hopefully it will taste good.

Prawn versus prawn. Though this whole business of "tasting good" warrants more serious investigation. I have cooked this dish in exactly the same way in both New York and in Calcutta. It just tastes different in the two places, and I have to say that it tastes quite a bit better in Calcutta. A seasoned cook will probably know why, and if so please comment here to your heart's content, but imho it has to be the prawn.

(There is also some positive probability that it could be the coconut. In Kolkata, I've used fresh white coconut for the cream; I've never done this in the United States. So my controls are not perfect, but that said, let me pursue the prawn hypothesis some more.)

Look: I'm not an expert on prawns. But the Bengali prawn certainly looks and tastes different. Sometimes they taste like crayfish. They are actively farmed, even the two kingly varieties both native to the region: the giant tiger shrimp Penaeus monodon, a.k.a. the bagda chingri, and the giant prawn Macrobrachium rosenbergii, or the galda chingri. Both the bagda and galda are large-headed, extremely succulent prawns. They are also quite expensive, but there is little doubt that both are to the malai born.

Etymology. Speaking of malai: There is also an interesting, unintended pun in the word as used here. It means "cream" in several Indian languages, but not coconut cream. It's cream from standard milk. But malai is also a distortion of "Malay" or "of Malaysia." This particular take appears to be the winner, as cooking in coconut is certainly characteristic of many Malaysian dishes.  This most classical of Bengali dishes is actually "Prawn Curry a la Malaysia". Chew on that (as you undoubtedly will if you cook up the recipe below). 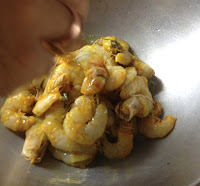 A half-kilogram of shelled, deveined prawns, ideally with heads and tails intact

turmeric and salt to coat the prawns with 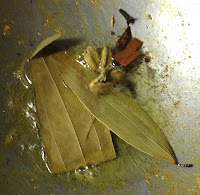 A bunch of fresh green coriander. Thoroughly wash and clean the roots and then chop them finely along with a handful of the leaves. Save the rest of the leaves for garnishing at the end.

Green chillies to taste, finely chopped. (Many Bengalis like to slice these lengthwise and introduce them whole into the curry.)

A 14 fl. oz. can of really creamy coconut milk, and last but not least: 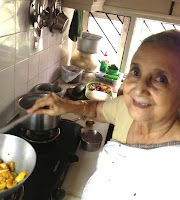 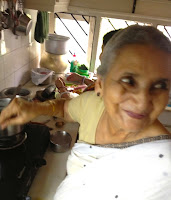 A mother who likes to spoil you, preferably this one who can cook and chat at the same time:

(All right, all right Ariel, you are hereby permitted to substitute your instant coffee for Hendricks. My gurus are given certain exemptions.)


Procedure. As my son might ask when he was all of three: Weady?

Heat up the mustard oil.

Throw in the prawns and fry them. After they are done, set aside. 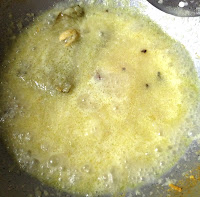 In the same oil, which should obviously be piping hot be now, throw in the garam masala, listen to the satisfying pit-pit, stir a few seconds to get the cardamom to swell up, and then chuck in the onion paste. 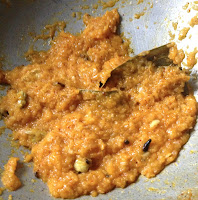 This you need to stir-fry this for a while, drawing the oil out and making sure that the onion is well and truly cooked. My sister Reena has tips on this: "add a pinch of salt which makes the onions sweat and release water, making it cook faster and brown nicely."

Next, the ginger, garlic, sugar, the coriander roots and the green chillies. Stir away, until the whole thing forms a nice, mushy object. 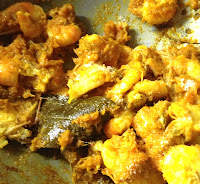 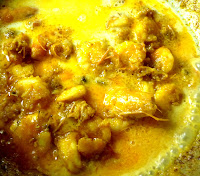 Then add the shrimp again, which should now be lovingly coated with the aforementioned mushy paste. After a bit of coating, pour in the coconut milk, cover and cook for five minutes. You can conserve the creamy layer of the coconut milk for mixing in right at the end.