Ruchir-Tuli Part 2. But I need to get this four-headedness out of the way first. The four heads refer not to the prawn at all, though you will pardon the titular license, but to a mysterious spice called char-mogoj (or four heads). A google search using Bengali phonetics will excavate some motley hits, but no serious definitions. But charmagaz gets you further; thanks Chhoti:

The reference is to four kinds of vegetable seeds, something that I never dreamt would enhance the value of any kind of cooking, but certainly appears to do so in this case. As far as I can ascertain, the char-mogoj refers to four items:  pumpkin, musk-melon, watermelon and cucumber seeds. (Ma says that chal-kumro or ash-gourd seeds are essential, so I am confused, but such are the ways of Bengali cooking.)

With that settled (or not), on to the recipe. 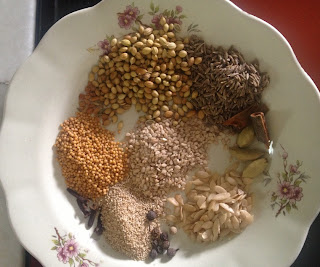 A bottle of good Willamette Valley pinot noir; Sula Cab-Shiraz (yes, very different) will have to do in a pinch (note: not used for cooking, but while cooking).

Take a large swig of the pinot. Then dry-roast the masala in a pan, and use a blender to grind to a fine powder. Do not overfry, it will become bitter. As soon as it crackles, a quick stir and off it comes. 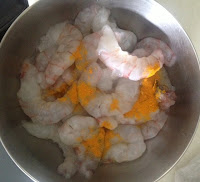 1/2 kilo of medium-sized prawns, heads on (so, paanch-mogoj really) but otherwise shelled and de-veined. (We're after a half-kilo after the shelling.)

turmeric and salt to coat the prawns

Take a second swig of the pinot. 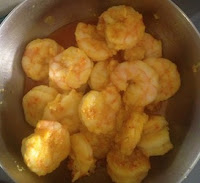 I like overcooking prawns, they acquire a slightly stringy, chewy texture that feels right to me. They do not feel right to others; e.g., to Joan Esteban. So figure out where you fall on the line that joins Juanito and me, and act accordingly.

In that same oil, put in the garlic-ginger paste. Follow up with a fifth swig of the pinot (am I counting right?) Stir for a while, put back the prawns plus the masala. Add some salt to taste. Add a little water so that the masala clings to the prawns, but then dry it out under fairly high heat. A minute or so, then done. Look right.